You needn’t look far to find documentation of the current shortage of healthcare professionals in this country. Whether caused by the increasingly stringent path to licensure, the rising costs of insurance for medical practitioners, or simply by rapidly aging baby-boomers in need of a physician, the result is the same: the U.S. is becoming more and more medically underserved.


Universities have taken up the charge of trying to attract the best and brightest students to the medical professions. Medical students spend long days and often nights on campus. Providing comfortable spaces for them to learn and study is essential to help them succeed and graduate. Whether through the renovation of existing facilities, or by creating that “bright, shiny new penny”, the universal goal that we see is the same: it’s time to focus on the future of health.

A 2013 study by the Health Resources and Services Administration (HRSA) and the Bureau of Health Professions (BHPR) found that 48 percent of the counties in the state of Arkansas had a shortage of health professionals. The state also ranks 42nd in terms of the ratio of primary care physicians per capita. At that time, in the burgeoning profession of osteopathic medicine, Arkansas was home to only 0.4 percent of the D.O.’s, nationally.


Furthermore, when you look at a map of the United States and plot out where the current schools of osteopathic medicine are located, you notice a large hole whose center is in northeastern Arkansas. States often see that adding a new school of medicine to their region creates a ripple effect, wherein they find that the number of students who graduate with degrees and who set-up practices in the area increases dramatically. Given these two truths, it is not hard to envision that a new medical school could do great things for both the economy and well-being of the region. 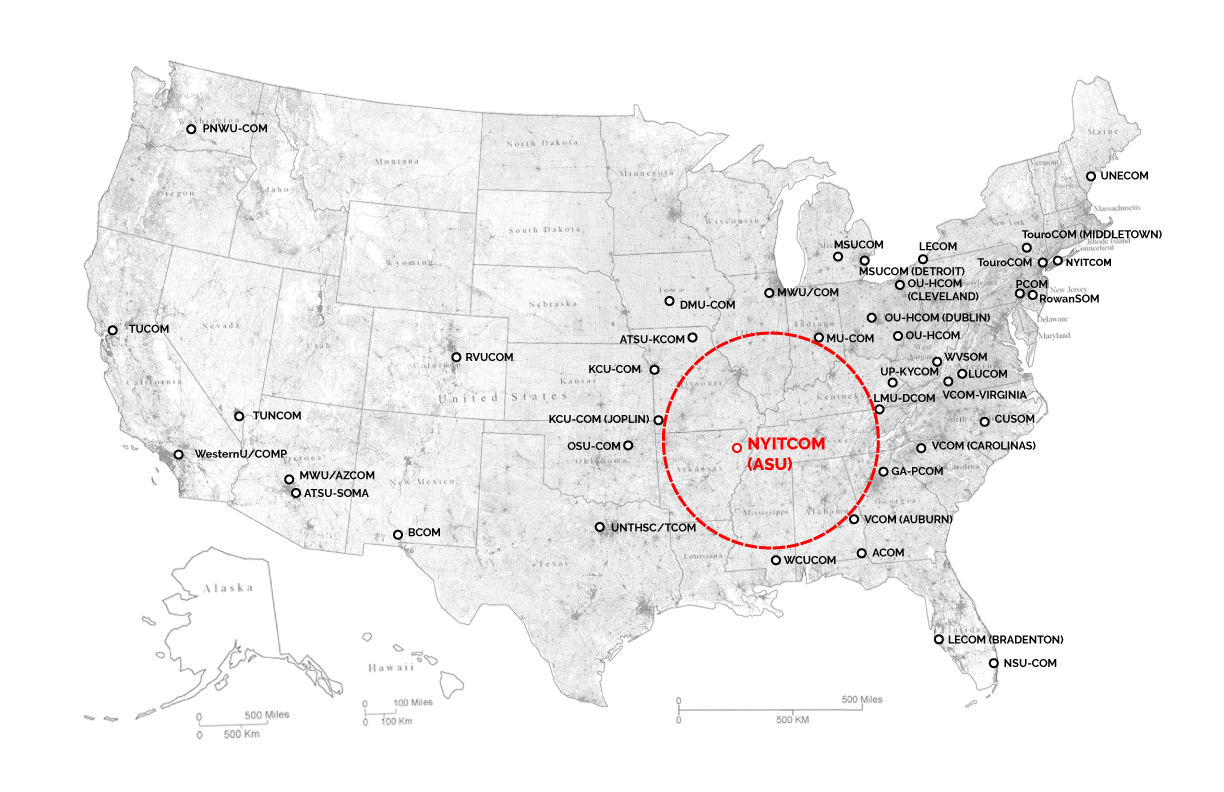 Enter New York Institute of Technology (NYIT) and Arkansas State University (ASU). NYIT, which already had more than 12,000 students in its system of five schools of medicine around the globe, was looking for another location where they could add value to an underserved area. ASU, which is located in Jonesboro, Arkansas, was already in the process of vacating a historic, 80,000 square foot structure in the heart of its campus. Arkansas had the need, NYIT had the program and the faculty and ASU had the space and the infrastructure to support a new school of medicine.

The two universities saw an opportunity to do great things together and, in 2015, engaged DesignGroup to study the feasibility of a new NYIT school of medicine at ASU. A few short months later, the universities hired DesignGroup – in partnership with AMR Architects out of Little Rock – to design their new college of osteopathic medicine in ASU’s existing Wilson Hall. The project had a very aggressive schedule, but when Wilson Hall re-opens its doors in the summer of 2016, it will more than double the number of students enrolled in D.O. schools across the U.S. who hail from the state of Arkansas. In its first year, the program has already brought medical jobs to the region, and hopes that many of its students decide to practice locally after they graduate from NYIT at ASU. 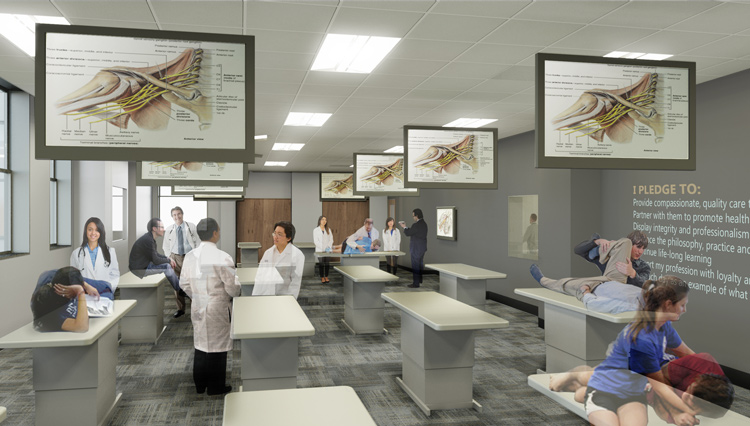 In 2012, Ohio University (OU), was faced with some similar challenges of wanting to increase their presence throughout the state of Ohio. Their Heritage College of Osteopathic Medicine (HCOM) was already a well-established beacon in the largely rural southeastern Ohio; and, for several decades, had been sending its students to The Cleveland Clinic to complete their medical rotations. So, when thinking about how and where to expand, the College realized it already had a friend in northeast Ohio. The institutions saw in each other a similar strength in partnership. They looked at the issue of medical education through a series of lenses: Where is there the greatest need for more doctors? Are there underserved areas in northeast Ohio where they could do the most good? Is there available space within the Cleveland Clinic’s vast network of hospitals for a new school of medicine? As it happened, the answers to their questions were easy to find.


Warrensville Heights, Ohio's South Pointe Hospital, which had already been an exceptional partner as a teaching hospital, was located in an area around Cleveland that was struggling with not only a decline in population, but also a decline in services. South Pointe also had an incredible asset: a medical campus with not one, but two large hospitals on its premises (one of which was sitting half empty). Negotiations began, and in 2013 OU decided to make its Cleveland home at South Pointe.


DesignGroup, teaming with local architectural firm, Perspectus, was hired to design this new home for OU. HCOM Cleveland saw its doors open in 2015, and has been a model for collaborative environments and modern medical education.

Hopefully, you’re seeing the common thread here: public-private partnerships, operating in remote locations and building a team of highly qualified design professionals to shepherd the process. Once the needs were identified, the partnerships were in place and the schools had to execute the plan, the question became: how do we leverage our expertise in medical education with new faculty and new facilities and from afar?


Enter technology. But not just any technology: specific technology that supports the space and the pedagogy of the program. The integration of audio/visual and I.T. components into all spaces must now be both seamless and pervasive. In simulation environments, these advancements in technology have not only become more real, but they are now able to be taught/observed/shared from any location and in any format. Direct visual observation, while sometimes preferable through a two-way mirror, can also sometimes be just as effective via webcams, microphones, networks or a decent Wi-Fi signal.


So what? For years now, you’ve been able to take online courses and lectures. Why is this new wave of technology different? It’s not so much that that the technology has drastically changed, it’s more that the application of it has. A student will find that when they graduate, they are often part of a team of physicians, nurses, administrators, specialists and other professionals. In their practice, communication needs to be as open and transparent and seamless as possible. The educational setting is now mirroring this practice. With the push to more case-based and group-based learning, the applied technology now allows for this transparency. 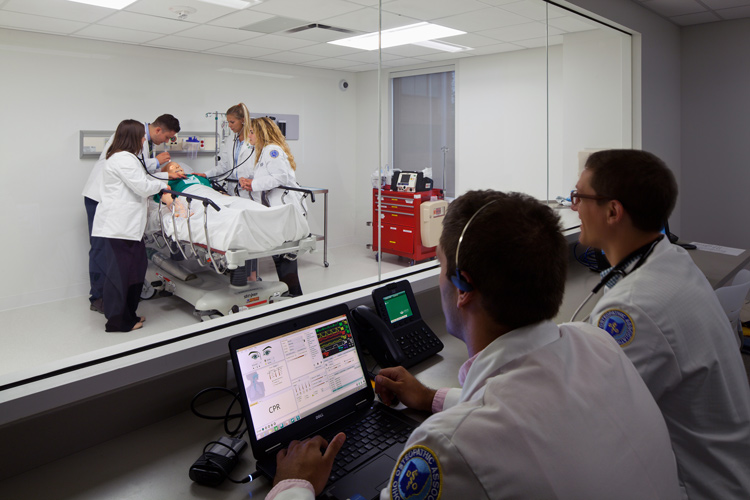 Not Just Bricks and Sticks

So if you build it in the right place, and if you have the right partner and if you put the right technology in the rooms, the program will flourish, right? Well, maybe. Designing schools of medicine is not like baking a cake; there is no one magic recipe. Or, if it is, it’s just like the cake your mom used to make you for your birthday. Do you remember what her secret ingredient was that made her cakes so wonderful? It was love.


Close your eyes and try to pull-up a mental image of your home. What do you see? Are you picturing four walls and a door, or are you picturing something more? I picture sitting on my back patio on a crisp Saturday morning; steam rising from the lip of my coffee, which is perched on the arm of my Adirondack chair while the birds cheerfully greet the day and each other with chirpy songs. I picture serenity. I picture comfort and warmth and a knowledge that I am safe. I picture an environment that I can control and shape and mold to suit my changing needs. Why should a medical student’s home on campus be any different? Why should the spaces they inhabit daily not be shown the same love and thought that your mother put into that delicious red velvet cake?


Medical education can be an emotionally charged experience. Students (and faculty) are exposed to imagery and engaged in situations and exercises which can be emotionally and physically exhausting, simulated or not. They need to be able to escape the high stress of these environments so that they can focus recharging their batteries. They need a sense of place, a home. An environment that is as customizable as it is comfortable. It is as important to get the interstitial spaces correct as it is the anatomy lab, the simulated ER, the mock exam room, etc. The successful spaces cannot be measured in metrics, nor tabulated in tables. They must be lived in and felt. 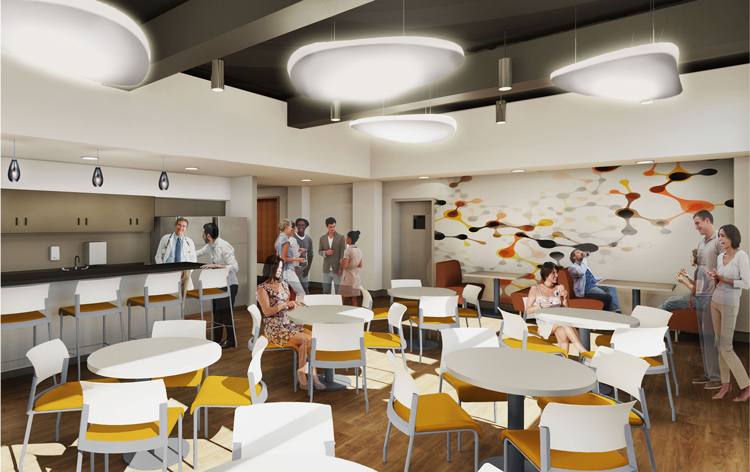 The Recipe for a School of Medicine

So, what does it take to make a new school of medicine? It must be viable, sure. It must be necessary. Find the right partners; there is no need to go it alone. The right people out there will want to help you. Use technology effectively and appropriately. Listen to and be mindful of pedagogy. Add this ingredient or that. Heck, put all the ingredients in you like. Just make sure you leave room for the secret ingredient that makes it feel like a place students and faculty wish to return to daily.

Ben leads DesignGroup’s education practice. He has focused his 13 year career on exceptional design and planning for academic facilities. Ben has significant experience designing student centered environments including health science facilities, laboratories, over 5,500 student housing beds, and has assessed and planned 30 million square feet of higher education campuses. Ben is an active participant with the Society of College and University Planners.

He is currently working on an osteopathic school of medicine renovation project for Arkansas State University and NYIT.

Medical Education Design: Six Shifts You Need to Understand Successful Student Experiences Start with Partnership How to Design a Healthier, More Sympathetic Medical Learning Environment Climate Change and College Living: Bold Ideas For the Future Med Ed During a Public Health Crisis The View from Home: How Architecture Students Continued to Learn Away from the Studio Considerations for Residence Life After COVID-19 What's Happening in Higher Education? Internet of Things (IOT) Evolution of Wellness Design Putting the "I" in BIM Can Tiny Technology Improve the Patient Experience? Investing in Reuse It's Time to Celebrate the Sciences

It's time to focus on the future of health.